MP Baba Diri Accuses the President and the Speaker of discrimination

Reports from thousands of citizens have reached the government on matters concerning discrimination. This has led to the formation of stringent laws to hold employers and other service providers accountable. These laws, however, seem to be benefiting those outside the legislature.

Koboko woman Member of Parliament, Margaret Baba Diri, claims that she is one of the Ugandans that have suffered under the pressure of discrimination because of her disability.

“They think that once you have become blind, you are mentally ill. Instead of talking to me, they will talk to my guide,” says Baba Diri. 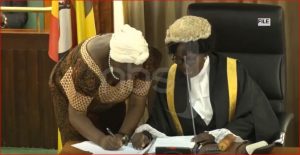 The 65-year-old legislator accuses President Yoweri Museveni and Speaker Rebecca Kadaga of discrimination by denying her chance to serve as parliamentary commissioner and minister.

“The Speaker has not selected me to go with her all these years, not even the Deputy Speaker or the President,” she added.

She says that she has applied many times for the position of the commissioner including ministerial positions but the appointing authorities have not considered her.

“I can be a minister, I can perform, but because I have a guide, they think this guide is going to leak secrets of the cabinet,” says Baba Diri.

President Yoweri Museveni Not Confident In His Ministers-Mayengo