A baby lost its arm yesterday during a C-section delivery at Jinja Regional Referral Hospital. According to the Director, Dr Edward Nkurunziza, the accident occurred after the senior doctor absconded from duty and left two junior doctors on duty who carried out the operation. 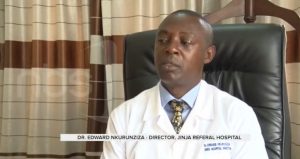 He revealed that although the incident was regarded as an accident, hospital management has suspended the junior doctors. And in collaboration with the Uganda Medical and Dental Council, the senior doctor is to be penalized after he absconded from duty.

“She can allow the intern to operate but he should be within the calling distance while that in case something happens which the intern has not experienced before, she can be called in to rescue the situation,” said Dr Nkurunziza.

He went ahead to reveal that investigations are being carried out on the interns for allegedly soliciting for a bribe from the mother of the victim after they had received one hundred thousand and were expecting a balance.