Benita Sengoba, a girlfriend to one of the suspects in the mobile money agents murder case has testified against her boyfriend Stanley Mulunda alias Duumba Frank.

Sengoba, Acacia at Shoprite supermarket clock tower, says she was in love with Mulunda and came to know him prior to his arrest through his co-accused Issa Ntale. 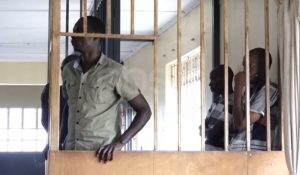 Two months into their relationship, Sengoba says Mulunda who was consistently on the move under unclear circumstances came to her home asking for help. He claimed his home had been raided by the Police and it wasn’t safe there.

Out of courtesy, she says she offered to house two of Mulunda’s friends to stay at her brother’s home. She says she was surprised to see her boyfriend had been arrested over murder.

She added that even the two friends she was housing hid the facts from her when they said her boyfriend had been arrested over tramped up charges.