George Mutekanga, the Commissioner of private schools in the Ministry of Education visited Top Care School, a private secondary school in Iganga municipality where 15 senior six students were denied permission to seat exams. 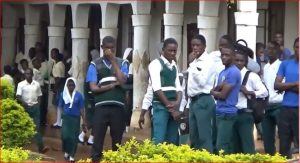 According to the Commissioner, the Minister for Education Janet Museveni wants all the affected students to seat their final exams and disciplinary actions are taken on the school appropriators.

“No cause for alarm, as we talk now the situation is under control, I have just talked to the RDC and the various relevant authorities, and parents who are willing to pay. So we are agreeing on the payment plan on how to clear the bill,” said Mutekanga.

Mutekanga went ahead to ask the school Director Speke Muyinga why the students had not sat the exams,  and he explained claiming to be absent when the incident happened.

“Every year when we are demanding them, we ask them to bring their parents or to commit themselves,” added Director Muyinga.

However, the students that missed their history exam, appealed to Government to give them an emergency paper because it was one of their best subjects.

Iganga Resident District Commissioner, Eva Kwesiga said that a group of well-wishers have expressed interest to clear the fees balances of the students such that they can finish their exams.

Kwesiga expressed her concern in the manner in which the school inflated the balance of the fees to 19 million Uganda shillings instead of 3.6 million shillings after getting news that some sympathisers offered to clear the tuition.