MPs led by the committee chairperson, Hon. Jacob Opolot entered their third day proving the unrest at Makerere University that has led to violent clashes with military, suspensions and abductions. 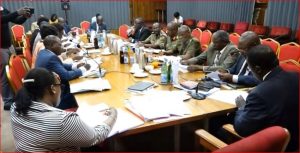 With Internal affairs, UPDF, students and Ministry of Education appearing, Makerere Vice-Chancellor(VC), Professor Barnabus Nawangwe, was under a hot seat as he met the committee.

Asman Basalirwa, MP Bugiri Municipality said that there is an impression that has been created alleging that the VC is very high-handed. He explained saying that his predecessors did not use authority in that manner.

Ongiertho Emmanual, Mp Jonam County, suggested that the best solution was to relieve the VC of his responsibilities. “You seem to be getting instructions from somewhere,” said Ongiertho.

Makerere Vice-Chancellor, Professor Barnabus Nawangwe came out to argue that he is a very digital and modern person denying that he has not threatened anyone, tasking the committee to provide the evidence.

The University Council, led by Ronald Magala used the meeting to dismiss allegations of sexual harassment towards University students at the hands of the military.