Members of Parliament walked into the chambers of parliament yesterday after the bells went off to start their plenary session that was expected to discuss a range of issues.

The legislators, however, started to feel like there was no hope of a seating an hour later after the Speaker’s chair had remained empty. 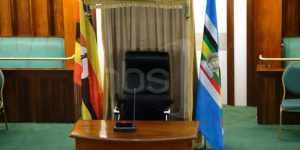 This comes days after the Speaker castigated ministers for dodging parliament sessions which she said had stalled business at the house. Some legislators said that they had not received any communication that plenary would not seat.

“Up to now, there is no official communication, it is whispers that there is no parliament,” said Ibrahim Semujju Nganda, the opposition Chief Whip.

He added that if that was court or any other organ of the state, there would have been quarrels all over intimating that taxpayers lose Ugshs 1.2 billion whenever parliament does not seat.

Legislators have come out to make demands that there be an alternative Speaker to lead sessions incase the Speaker is not available.

“When the Speaker and the Deputy Speaker are both not around, maybe the other Deputy Speaker can chair the house so that we don’t have to see many challenges happening like we had today,” Mwijukye Francis, MP Buhwegu county said.