The State Minister for East African Affairs  Julius Maganda, rushed to Parliament to present a ministerial statement on the upcoming 20th-anniversary celebrations for the East African Community.

The Ministry responsible for East Africa affairs in Uganda feels it’s worth celebrating the twenty years of the East African Community.

The Minister indicated how the region is to achieve its political federation by 2024 and president Yoweri Museveni is soon expected to launch a team of experts to draft the constitution in that line. 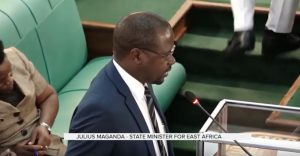 However, the minister’s statement instead angered legislators who questioned the relevance of the celebrations amidst tensions between member states.

Women And Youth Pushing For Peace In South Sudan