Police and military raided Hannington road in the city centre to carry out an operation that turned into a nightmare for some city dwellers who had fluked into the bar for alcohol, shisha and opium. 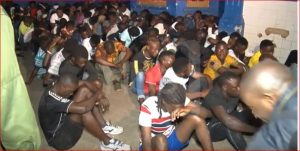 “When we sent there our officers, true, the people we got there were smoking shisha and opium. They use this place as a place for massage during day time, but at night they turned into something different,”  said Patrick Onyango, the Speaker, Kampala Metropolitan Police.

Over 120 dwellers saw their party cut short after police arrested most of whom were referred to as university students, charging them with possession and consumption of condemned substances.

“We have started the process of screening, those who are innocent we shall give them a police bond, and those who are hardcore definitely will appear in court,” added Patrick Onyango.

He said they have been carrying out that operation in conjunction with Uganda Health Consumer Association assuring that that is not the first time and will not be the last.