Dialogue is an Insult to Me – Museveni 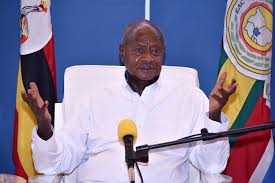 President Museveni while launching the first clinical trial for COVID 19 treatment at Mulago Hospital lashed out at those who think treatment and vaccine can’t be locally produced, calling it a slave mentality.

Many have called for mediation and dialogue following a hotly contested presidential race where he emerged the winner. President Museveni has said a few have approached him willing to mediate between opposition and him, he says this is an insult since he knows the address of the opposition leaders and they know his too.

The president-elect concluded by saying that this year, he will ensure that scientists are well paid and he urged people to corporate as far as the COVID 19 trial treatment is concerned.