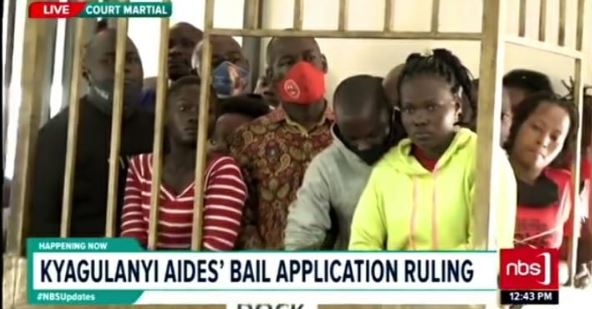 The General Court Martial in Makindye has released on bail, 13 supporters to former National Unity Platform presidential candidate Robert Kyagulanyi. The army court chairman, however, noted that Kyagulanyi’s singing partner, Ali Bukeni , also known as Nubian Li and the head of his personal bodyguards Eddy Ssebufu also known as Eddie Mutwe and 34 others will have to wait longer for the court to rule on their baill on Monday, February 15, 2021.

The army prosecution alleges that all the 49 suspects and others still at large on January 3, at Makerere Kavule Kigundu zone, were found in possession of four rounds of ammunition which is a monopoly of the Defense Forces. They were arrested on Robert Kyagulanyi Ssentamu’s campaign trail in Kalangala.

We Have Enough Evidence to Backup the Kyagulanyi Petition – Lawyer Ssegona