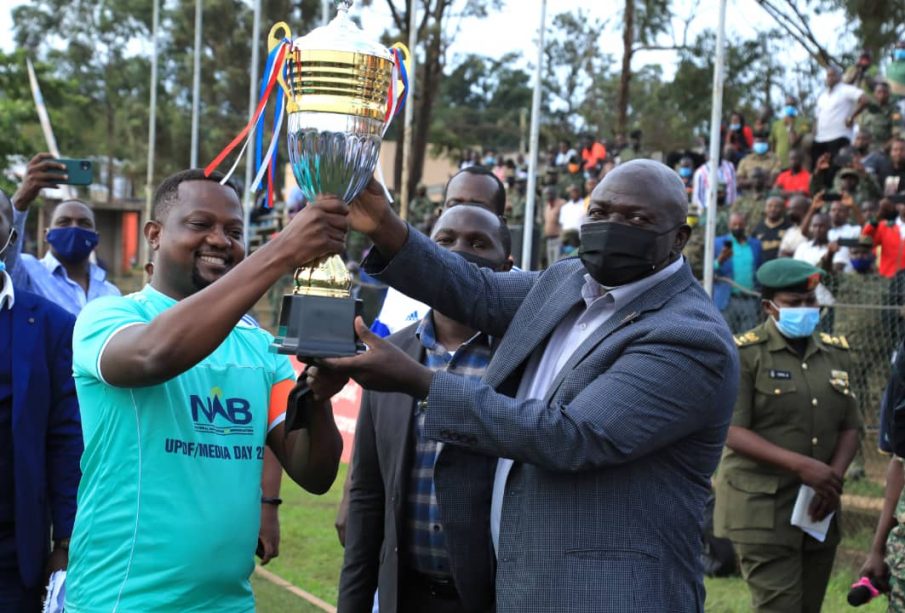 Broadcasters under their umbrella body, the National Association of Broadcasters have reached an agreement with the UPDF to observe mutual respect during the course of their duties.

The relationship between the security agencies and journalists has not been the best in the past one year courtesy of the squabbles between the two.

Dozens of soldiers in February beat up and injured a number of journalists who had gone to cover a petition by National Unity Platform leader Robert Kyagulanyi to the UNHCR in what the victims described as a targeted and unprovoked broad-day attack on the media fraternity.

The lineups.
Following the unfortunate happenings, the victims insisted the brutality meted out to the journalists was deliberate and aimed at discouraging the media from scrutinizing security agencies’ actions.

On Friday, two football matches were organized between the media and UPDF officers at the Philip Omodi stadium in Lugogo in a move meant to mend the sour relationship between the two.

Some of the victims of the brutality by the security agencies participated in the two games in which the UPDF lost both to journalists.

Consequently, NAB and UPDF reached an agreement in which they undertook to work closely with each other.

“Both parties shall treat each other with dignity, respect and uphold all the rights including the responsible discharge of the freedom of the press and other media, mindful of the rights and freedoms of others as well as the obligations under the Constitution and the laws of the Republic of Uganda,” a joint communiqué by Kin Kariisa, the NAB chairman and Gen David Muhoozi, the Chief of Defence Forces in the UPDF read in part.

Gen Katumba Wamala was the chief guest.
“NAB shall endeavor and ensure that the journalists and the media practitioners are identifiable at all times in the course of their work using branded press jackets and press IDs associated to a media house or issued by the media council or both.”

Daily Monitor photojournalist, Abubaker Lubowa said he was optimistic this is going to open a new chapter in terms of good relations between the security agencies and journalists.

“I participated in the math and I personally pray to see free media and I believe this is a good step forward,”Lubowa said.