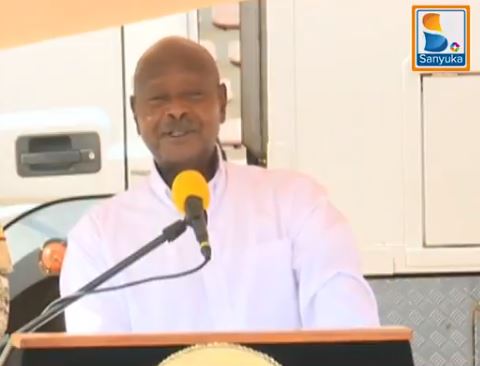 “Today, I want to address three issues. One is the issue of discipline in the security forces and human rights of the population. I will also talk briefly about the Emyooga program. I will then talk about the vaccines.

This is not the time for people to interact in big groups. When you see me refusing to stop, I am not ignoring you. I don’t want to be part of the people causing other people’s death. I have been around the country, and on all these occasions, people stand by the road wanting me to stop and talk to them.

People should be in leadership to serve the people, not their interests. When you put on the uniform of Uganda, you must respect the people. People in uniform must not bark at anyone or beat anyone, not even the wrong ones. There should be no killing of any Ugandan for any reason apart from if you are condemned by the court of law to be hanged.

Keeping people in jail for a long period without trial is not allowed. Jails are not stores for people. Deporting foreigners without trial is wrong. Deportation must be handled legally. These loopholes can be a disadvantage to our country. When we had riots in November, some of the people killed were rioters, but there was also an issue of stray bullets. Police produced a report, and after scrutiny, it will be made available to the public.

Our human rights record is incomparable to any other in the world. The NRM doesn’t believe in revenge. We don’t believe in assassinations of opponents. Why should I kill them? By killing him, it means his argument is so powerful, and I have no option but to do away with him. We even didn’t want to kill Amin or Obote; at one time, I saved Tito Okello from being killed here at the Nile Mansions. We fight all the people who oppose us politically. And we have always defeated them politically.

When we came into power, Uganda was number 4 in the whole world for producing refugees. Right now, there are no refugees from Uganda. Instead, we have got 1.6 million refugees from other countries. By observing human rights, we have stabilized our country. Do not damage our legitimacy, history and achievements.

Do not damage our legitimacy, history and achievements. Why do you beat a prisoner? Is it because you are too lazy to interrogate him? Why? Because of these mistakes, I issued directives to the security forces. I will put them in a booklet which I will avail to the public. Torture can cause someone to admit to committing a crime because of fear even though he didn’t do it. This will cause the real criminals to continue their crimes because the security forces chose the wrong target.

We defeated Lakwena, Kony, ADF; we can not fail to cope with cowards using boda bodas to kill people. If we stick to principles, no one will oppose us forever because we are right. That’s why you see opposition politicians crossing to our side. Beating captives is wrong because you undermine your case in court when the court discovers that you used torture.

I want people of Uganda to know that I will launch a serious campaign to uproot the culture of reactionary behavior in our armed forces.

Operation Wealth Creation and the Parish model will handle agriculture. Emyooga looks at other ventures like carpentry, welding, performing artists, among others. It will be served at the constituency level. Over 6,000 Emyooga SACCOs have already received seed capital on their accounts. I have been told about a few cases of indiscipline, which I have asked the Minister in charge of Cooperatives to deal with. If you hear of extortion, please report it. I call upon Ugandans to support the Emyooga program to promote savings. This is what will secure the future of this country. What I was told yesterday was that some of the money is still on the account. When Hon. Anita Among was sending MPs to check on the Emyooga program; she was wondering what the UGX 1.2 billion that was sent to her district was doing because there was nothing on the ground.

We are struggling to buy #COVID19 vaccines. We are talking with all manufacturers, and I am sure we shall succeed in vaccinating all the 21 million people who need vaccination.” – Presodent Museveni

President Museveni to Address the Nation on Security