Gen. Muhoozi Kainerugaba and Hon. Ssenyonyi in a Cyber War 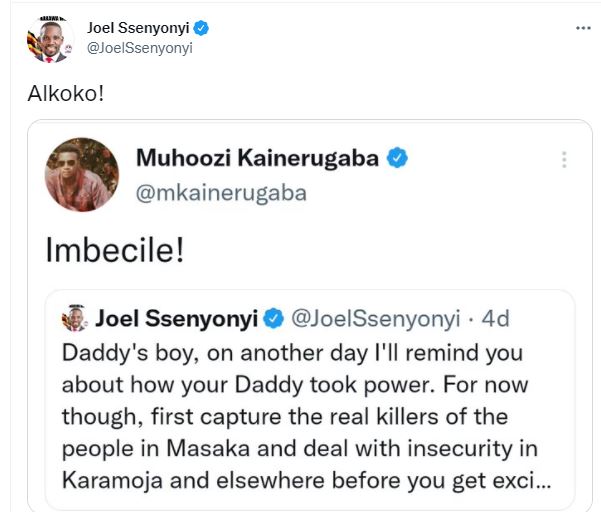 In a tweet, first son General Muhozi Kainerugaba said the UPDF would deal with the Guinea coup plotters very first with authority of the president, “If our Commander in Chief gave us instructions it wouldn’t take UPDF a day to discipline mutinous troops like the ones in Guinea-Conakry,” said Gen. Muhoozi.

The NUP spokesperson Joel Ssenyonyi then responded asking the general to deal with home based threats first, “Daddy’s boy, on another day I’ll remind you about how your Daddy took power. For now though, first capture the real killers of the people in Masaka and deal with insecurity in Karamoja and elsewhere before you get excited!”

To that, Muhoozi was offended and he hit back with the word, “imbicile” and Ssenyonyi esponded with “Alkoko” to mean the general is drunk.

It is not yet clear if Gen. Muhoozi Kainerugaba was doing the tweeting by himself or it was his admin or perhaps hacked.