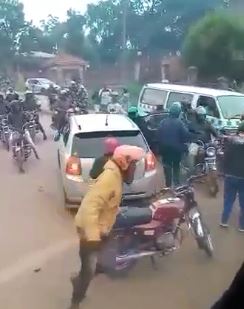 On Sunday morning, a former UN driver was beaten to death by a mob of boda boda riders who accused him of knocking their colleague in an incident that happened at Mengo. The dead man is Aziz Bashir, he reportedly failed to agree with the boda boda rider who he allegedly knocked.

Uganda Police has said investigation in ongoing into the incident and the culprits will be brought to book.

Ssegirinya and Ssewanyana Are in Pain – Kyagulanyi

Prof Kanyeihamba to petition court over Museveni’s move to scrap the right ...