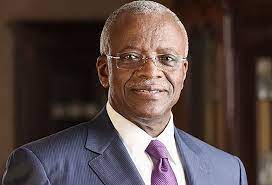 After close to 6 years, Uganda’s former Prime Minister and 2016 Presidential candidate, John Patrick Amama Mbabazi, has bounced back to the scene.

While appearing before the press today, John Patrick Amama Mbabazi, 73, issued a press release on the African Global Security Foundation launch, where he was appointed the chairperson.

The Foundation was set up as a continental security thinktank tasked with disseminating information and views about Africa’s security plight. The founding member states are Congo Brazzaville, DRC, Mauritius, Senegal, Togo, and Uganda.

“One of the reasons why states exist and the central mission of the African Union and United Nations is to maintain peace and security. This can be accomplished by all parties working together by preventing conflict”, said Amama Mbabazi.

According to Amama Mbabazi, this Foundation isn’t a governmental body or a state organ and won’t be working for anyone or any group but the good of Africa.

When asked about the torture that is taking place in the country, Amama Mbabazi said his views on torture were well known and documented.

“Torture is wrong, and it is prohibited in our law. I belong to NRM, and one of the things we fought for was the freedom of everybody regardless of their opinions. Torture isn’t a civilized way of doing anything,” he said.

When asked if President Museveni proposed his name to chair the Foundation, Amama Mbabazi replied that he didn’t know but was sure that the Presidents of the member states, including President Museveni, had confidence in him

The problem is we are building around elites. The elites fail the ...