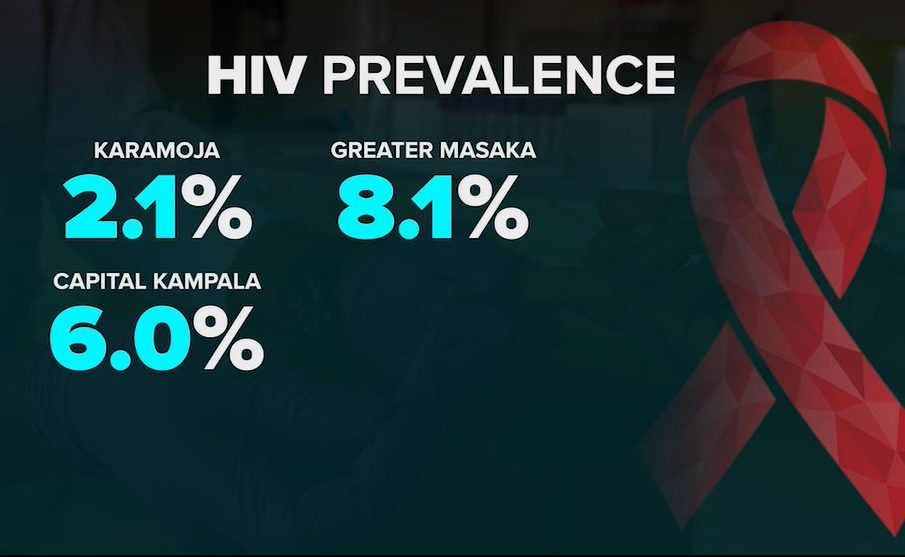 The Uganda Population Based HIV Impact Assessment survey was conducted between March 2020 and February 2021.

The prevalence is higher among adults in urban areas at 7.1 per cent compared to their counterparts in rural areas at 5.2 per cent – a major breakthrough in the fight against the scourge.

The prevalence is lowest Karamoja at 2.1 per cent and highest in greater Masaka at 8.1 per cent. Meanwhile, it is at 6.0 per cent in the capital Kampala and at 2.8 per cent in West Nile – another sub region with one of the lowest rates.

Contrary to findings in the 2016 report, HIV Prevalence was lowest in people aged 15 to 19 years and highest in those between 45 to 54 years pointing to the effects of lifestyles people lead.

Meanwhile, infections among girls aged 15 to 19 years was 3 times higher than in their male counterparts – pointing to the life choices teenagers make.

The ministry of health has been applauded for the continued investment in achieving the United Nations 90 90 90 strategy.

It’s however worthwhile to note that about 20 per cent of Ugandans don’t know their HIV status and continue to contribute to new infections.

Men in Karamoja however continue to shun safe circumcision even though there was a rise in 42.5 per cent in 2016 to 57.5 per cent in the study period among those aged 15 to 49 years.

The survey findings are expected to enable the country make targeted investments in the fight against HIV.

The survey was funded by the United States Presidents emergency plan for AIDS relief – PEPFAF conducted by the Ministry of Health and ICAP at Colombia University.

Sudhir Gets Back Crane Bank