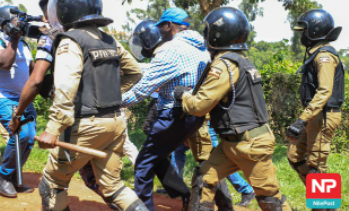 Dr. Kizza Besigye was arrested this afternoon, his attempt to walk to Kampala was foiled by security

BREAKING: Rtd. Col. Dr. Kizza Besigye has been arrested outside his home as he attempted to move to town in protest of the unreasonable commodity prices and alleged "political succession".

UPDATE: Dr. @kizzabesigye1's home manager, Mwesigye Benson, has been arrested by the police.

UPDF Apologises for Misconduct of Officer