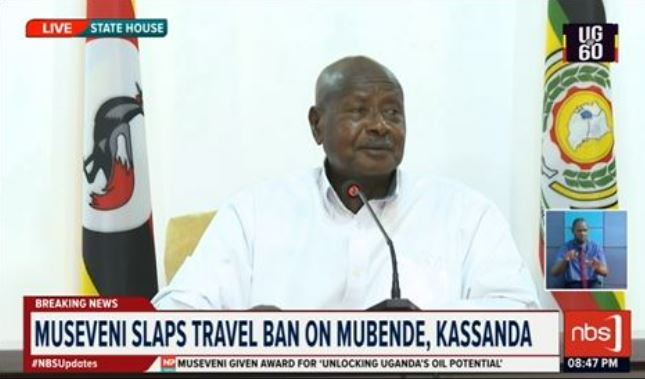 President Museveni has addressed the nation for a third time in relation to Ebola outbreak in the country, imposing 21 days, movement restriction in and out of Kasanda and Mubende districts respectively.

Movements from Mubende to Kasanda and vice versa are prohibited.

There will be a curfew in Mubende and Kasanda districts starting from 7 PM up to 6 AM.

Only cargo, government, and response team vehicles will be permitted to move in Mubende and Kasanda districts according to the president, however, transit vehicles, public and private vehicles crossing through Kasanda and Mubende districts are permitted to move but with police clearance and shall not stop to pick up or drop off people.

Anyone who sleeps in the districts of Mubende and Kasanda shall remain there for 21 days.

Boda bodas, places of worship, entertainment areas, seasonal markets are all closed for twenty-one days. The president has said schools will continue to operate however, the children have to wear uniform and those with signs and symptoms of Ebola should not go to school.

The temperature of all the learners, teachers, and none teaching staff should be monitored daily.

President Museveni has said these tougher measures had to be adopted to save lives since people have failed to listen and are recklessly spreading Ebola.