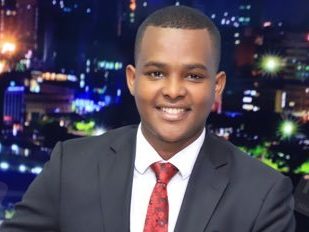 He is a renowned Ugandan investigative journalist at NBS TV Uganda and Next Media Services in Kampala Uganda.

He is the youngest most followed youth current affairs journalist in Uganda.

Canary Mugume was born on 7 January, 1995 in Mbarara District in Western Uganda where he lived with his mother before moving to Kampala for his High School Education.

Canary Mugume studied from International University of East Africa (IUEA) WHERE HE GRADUATED WITH A Bachelor Degree of Information Science and Technology on 29 November 29th 2021.

Canary Mugume started journalism in 2007 in Mbarara at Radio West where he read youth and children news after his Primary education while still at Miracle TV where he hosted at Miracle Centre Cathedral as a youth leader. He also joined Daily Monitor as a Freelance writer for the print newspaper.

Canary Mugume joined NBS TV in 2016 after he was hired by the Media executive Kin Kariisa who hand selected then journalist after he had finished his interview and after leaving Miracle TV and Miracle TV.

“Smoking Music” away. Drugs in the Ugandan Music industry