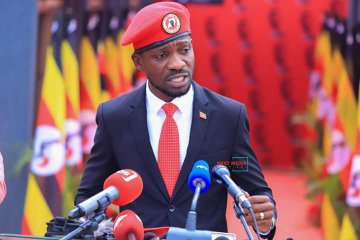 National Unity Platform party President Robert Kyagulanyi Ssentamu condemned the continued detention of Hon. Muhammad Ssegirinya who remains in prison because Hon. Zaake his surety is out of the country. On the other hand, MP Allan Ssewanyana was released but shortly rearrested by the UPDF according to the Spokesperson of the force, Flavia Byekwaso.

“I want to add my voice to condemn the injustice in this country. Hon. Ssewanyana was released but immediately abducted, we don’t know where he is. This should let the world know that we are being ruled by a tyrant and we must continue to fight,” said Robert Kyagulanyi Ssentamu

Kyagulanyi also explained why he was barred from going to the United States, where he was slated to attend a conference. He says the guidelines for travelers from countries in the red zone affected him.