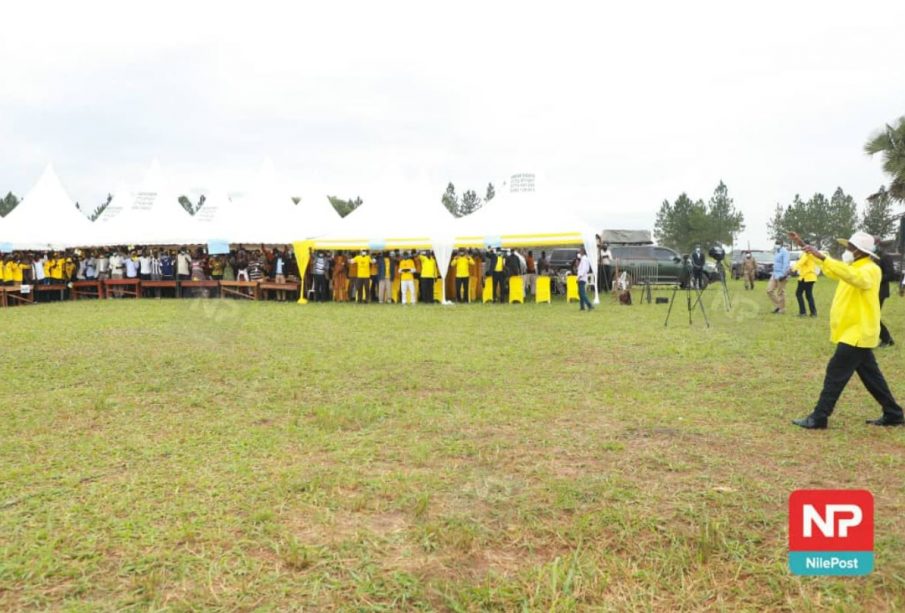 President Museveni has today touched base in Omoro district to campaign for the NRM candidate Andrew Ojok Oulanyah who seeks to replace his father the Late Jacob Oulanyah as Member of Parliament for the area.

‘We are here to get someone to finish Jacob Oulanyah’s term. Andrew Ojok and other leaders should be clear on how to help our people. Uganda is easy to develop if you are clear. The biggest problem is lack of clarity.’ President Museveni.

In his speech, President Museveni promised to deal with the nodding disease syndrome that has been a problem in the area for a long time.

‘We shall also discuss on how to deal with the issue of nodding syndrome,’ President Museveni.

Museveni said there is money to compensate people who lost cows in Teso, Lango and Acholi, they will be paid soon.

Museveni also pledged support to the Oulanyah fund, a fund that was created to ensure that Oulanyah’s children continue with school, this extents to other orphans of the area. President Museveni has said a technical school will also be erected in Omoro.

‘I’ll also build a technical school here, to remember our work and our people who are no longer with us.” President Museveni

Museveni has said a soya bean processing plant is going to be constructed in Omoro since the locals have taken up growing the crop.

Since the people of Omoro have started on soya bean, I’m going to look for a processor for you.” President Museveni.

President Museveni has urged families in Omoro to borrow money from SACCO, he says UGX,1OO million will be available for borrowing from next financial year.

We are putting UGX.100 million per parish in the next financial year for your SACCOS. This will be yearly. Families should borrow UGX. 1 million each and buy seedlings.” President