The Parliamentary Committee of Education and Sports, on Monday, started interfacing with all the relevant stakeholders to manage the ongoing strike at Makerere University. The students’ leadership have explained their disappointment in the University management for failing to adhere to the directives of Parliament preventing the end of the strike. 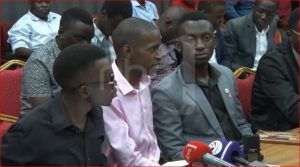 The students have questioned why the University management has suspended students who were simply expressing their views on social media.

They are wondering why students had to be suspended because of a tweet, just because it did not agree with management, revealing that they are dealing with mafias on a level of professors.

The Guild council also explained how the 15% tuition increment was illegally put in place after compromising the former Guild president. They have argued that the increment has made the tuition unaffordable as over 1,000 students have already dropped out as a result.

The committee members report that they were surprised that there were government spies in almost all lectures, some even left to attend lectures with their guns, something that puts their life at risk.

“We even have spies, we have spies in our class, but they are government-aided, they are sponsored by the State and this is a reality, I am a class rep,” said a committee member.