Kampala Capital City Authority Council last week declined the reading of the KCCA budget for the financial year 2020/2021, on grounds that the Executive Director’s term of office had expired and no extension had been made.

Lord Mayor, Erias Lukwago, however, believes there is more to the budget than is being let on claiming that it’s being influenced by the KCCA Minister Beti Kamya. 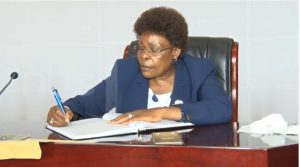 “Beti Kamya made a promise to Mr Museveni that look, am going to turn around Kampala critically into your favour, and she is scratching around getting strategies on how to turn  Mr Museveni’s fortunes around in Kampala, she is hitting a dead end,” said Erias Lukwago.

He accused the Minister of using the budget as a tool of raising funds which are going to be dished out to the people in Kampala to buy their vote.

He went ahead to say that they want to use Engineer Andrew Kitaka, the Ag. Executive Director, KCCA who he referred to as a good, humble and unfortunate gentleman but stated that they don’t want that to happen.

Lukwago maintains that the Kitaka saga is Beti Kamya’s making to foster fights between the political and technical wings, accusing her of quietly manipulating the KCCA budget to syphon money for the ruling NRM to fund its electoral activities.