A resident of Naalya who has been impersonating as an enforcement officer, Caleb Kankiriho was apprehended by the URA after corning 34-year-old Fred Kasozi of one million shillings. 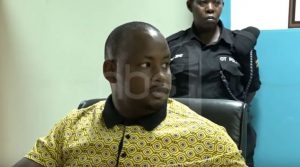 “If you want me to leave you to offload, pay 2 million shillings or else I am taking your goods to the URA offices in Nakawa,” said Caleb Kankiriho.

The Acting Commissioner Customs Julius Rubagumya said that the ratchet is big and some of the URA informants have been arrested. Rubagumya said that  Kankiriho was arrested after receiving several complaints from traders forcing the tax body to trail him.

“This group is said to have the protection of some security agents with whom they move and stop tracks and demand not to be paid so as not to call customs enforcement to intercept the trucks for re-verification,” said Rubagumya.