“Be Ware of Fraudsters,” Uganda Police 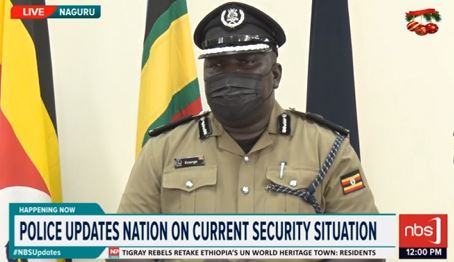 In a presser this afternoon, Uganda Police spokersperson Fred Enanga has warned the public that this festive season, they have began to register cases of fraud and will intensify.

We have received complaints from people who receive calls or text messages from people who claim to be employers. Some officers have been victims to fraudsters who said they would process for them passports to go for a training course by Swiss Government. Fraudsters are using Christmas gifts and packages to fraud. Those engaging in online transactions should also be careful…” Fred Enanga

Enanga also condemned an incident in Kayunga where an ambulance driver who is still on the run was caught ferrying fifteen people in an ambulance and said the culprit will brought to book.

We managed to arrest four people who were journalists. It is not something good. As you are aware, ambulances are for emergency health care,” said Enanga

Enanga has also condemned attacks on police officers that have become rampant as they register four cases in four months.

We have registered four serious attacks on police officers in the last four months. We are investigating to find out whether this is an organized arrangement to get guns from the police,” Fred Enanga

Fred Enanga also urged the public to look out for the girl child as cases of victimization are on the rise citing a case in Kayunga where a grandfather sexually assaulted a nine year old granddaughter.

We have increased victimization of children by grandparents. In Kayunga, a nine-year-old girl was sexually assaulted by her grandfather. It took courage of a boy who was with them at the fields who raised an alarm,” Fred Enanga

Fred Enanga urged the members of the public to maintaining law and order during the festive season.

If you are arrested during this period, the chances of coming out are very slim. You could come out after new year,” Fred Enanga warned.