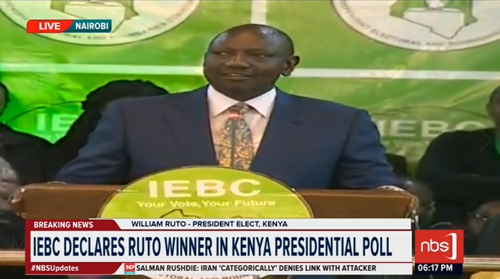 Amid allegations of system hacking, William Ruto has been announce the winner of the hotly contested presidential race in Kenya. Ruto garnered 7,176,141 representing 50.49% and Raila Odinga got 6,942,930 representing 48.85%. On the podium, Ruto has thanked his opponent Raila for a good race.

I thank Raila Odinga for a campaign that we all dwelled on issues and we tried to sell an agenda to Kenyans. I want to promise that I’ll work with all elected leaders so that we can fashion a country that leaves no body behind,” William Ruto

Ruto has promised to work with all Kenyans for a better country and also thanked the outgoing president, Uhuru Kenyatta, promising to build on what he has done.

I thank my boss, Uhuru Kenyatta who has worked with me. I want to commit that I’ll build on the foundation that Uhuru and I put together and take this country on the next level,” William Ruto, Kenya’s President-elect

Ruto has said there is no time to point fingers but rather, working together for a functioning democratic prosperous Kenya is what is on the agenda.

I know many are wondering especially those who have done many things against us. I want to tell them that there’s nothing to fear. There’s no room for vengeance or looking back,” William Ruto, Kenya’s President-elect

IEBC Divided Ahead of The Big Announcement in Kenya

How thieves steal cars in under a minute