Four suspects including Bob Anichan, a UPDF deserter formerly attached to Uganda Military Academy Kabamba, Dennis Mangusho, formerly attached to the 63rd  battalion, Stanley Mulunda a casual labourer from Masanafu and Issa Ntale, a Boda Boda rider, have been ordered to defend themselves against accusations of the murder of two. 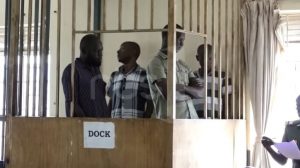 The victims were two ladies working as mobile money agents in Zana on Entebbe Road, Harriet Nalwadda and Moreen Nakabuubi who were shot dead by the suspected gunmen riding on motorcycles on June 10, 2019.

According to Lt. Gen. Andrew Gutti, the State produced impressive evidence against the group of gunmen proving that the suspects had run away with  Shs6.8 million after committing the crime.

Three of the four suspects chose to stay silent while the other gave his defence on oath. The group is facing other murder charges in the same court.