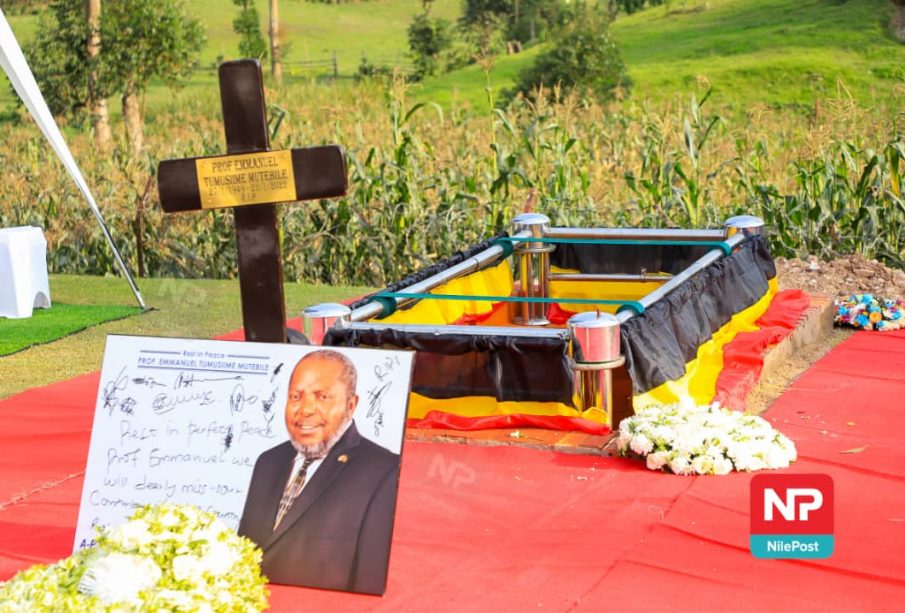 At about half to midday, the body of the now former governor bank of Uganda Professor Emmanuel Tumusiime Mutebire arrived at Kigezi High school primary playground for the church service on Sunday

The ceremony started with the laying of the wreath by family, friends, government officials and political leaders.

In a speech read by Prime Minister of Uganda Robinah Nabbanja, President Museveni commended the late governor towards restoring Uganda’s economy that helped in controlling inflation that had climbed to 250% in 1989.

That approach included, controlling inflation through managing government budget expenditures based on available resources, liberalisation of the exchange rate and privatisation of the government enterprises, among other policies.”

He also challenged the youth to draw inspiration from the fallen governor in order to take up such positions.

Mutebile did his part and the young generation should take on the mantle.”

Betty Mutebile the widow applauded the late husband for the generosity, unity and a man of his word

I met Emmanuel Mutebile through a friend. Initially, I wasn’t interested, but she told me that he was a man of his word, and that was enough for me. Throughout our relationship, he always stood by his word,” Betty Mutebile.

Don Kaberuka the special envoy of the president of the republic of Rwanda said that his presence is a clear indicator that the two countries desire to be in harmony.

To all my friends here, I bring greetings of friendship between the people of Rwanda and the people of Kigezi, Kabale and Uganda. Looking forward to working together to resolve some of the problems which have been a challenge in recent days,” Don Kaberuka.

Other family members described Professor Mutebile as a key person in their lives.

He was a great man both to family, friends, government and the bank. He was a man for all seasons. We will always remember you as dad, friend and mentor.”

Friends and political leaders in Kigezi expressed the great loss of the kigezi pride.

Kigezi has lost a great man, from his early stages, He was working for the unity of the people of Kigezi and indeed Uganda,”
Jim Muhwezi

He served his country, continent and humanity,” Mike Atiang Ego.

At a quarter to 6pm the body of the former governor was laid to rest at his home in Omuruhita Kabale Municipality.

Rise and Fight for Your Freedom – Besigye to Ugandans