Supporters of the People’s government gathered at their group’s headquarters along Kayunga road in Kampala to sign a petition that is intended to drag president Museveni to the International Criminal court.

The group that comprised of mostly FDC party leaders and political activists flanked their President Dr Kizza Besigye expressing full support to their cause.

Besigye, however, scoffed those who do not believe that this petition will stand emphasizing their commitment to get a minimum of two million signatures to support the paperwork. 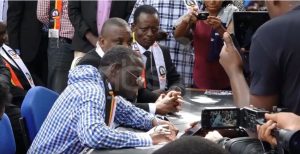 “We have also prepared a petition online for those people especially outside Uganda who want to be part of this. Links are going to be circulated, we don’t want anybody in Uganda or outside to say I wanted to sign but didn’t know how,” said Besigye.

Besigye went ahead to lash out at political leaders who bark but never bite calling upon them to sign the petition. He said that they need to be counted now, not just talk amongst others. He added that they have to come out and append their signatures.

“History is being made, those who are putting their names forward to say Museveni must be committed to trial must be indicted and tried, and pay for his offences should pin their names,” Besigye stressed out.