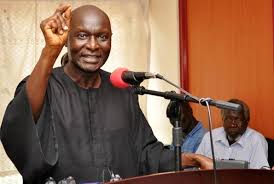 Former President of the Uganda People’s Congress Olara Otunnu has applauded the medical professionals who jumped into the bridge and have proved that against all odds, they are ready for any job. He stated that he is enormously proud of the team that has been under the leadership of Dr. Jane Ruth Aceng saying that lessons need to be drawn from how they have responded for future planning.

Otunnu said that the measures put in place by the President were taken up by everyone but they were late. He mentioned that focusing attention on Entebbe airport took the attention off the land borders until the end of March that they woke up adding that they also forgot about the truck drivers.

“As of now, we can’t say we don’t have community transmissions in Uganda. We have never done any serious randomized community testing. We should be focusing on the actions to take, get the best minds around the table, and be on top of our game,” said Olara Otunu.

Otunnu said that the lockdown should be eased but not at a go stating that President Museveni’s messages have been confusing claiming that he has been saying too much for too long. He said that any crucial message should not take too long to deliver adding that 40 minutes should be enough.

“He needs to give a clear message to Uganda. When a country is facing a crisis like this, you cannot lead as a lone ranger. It requires the best minds to be put together to apply lessons from across the world. President Museveni needs to have a body of people to face this problem with,” said Otunnu.

Olara Otunnu said that every country in the world has come up with a COVID-19 roadmap but Uganda does not have that. “In this war, we do not have or even need secret agendas. President Museveni needs to let everyone know what the plan is because if people know, they will be trusted,” stated Otunnu.

We need To Have Elections-Venansius Baryamureeba