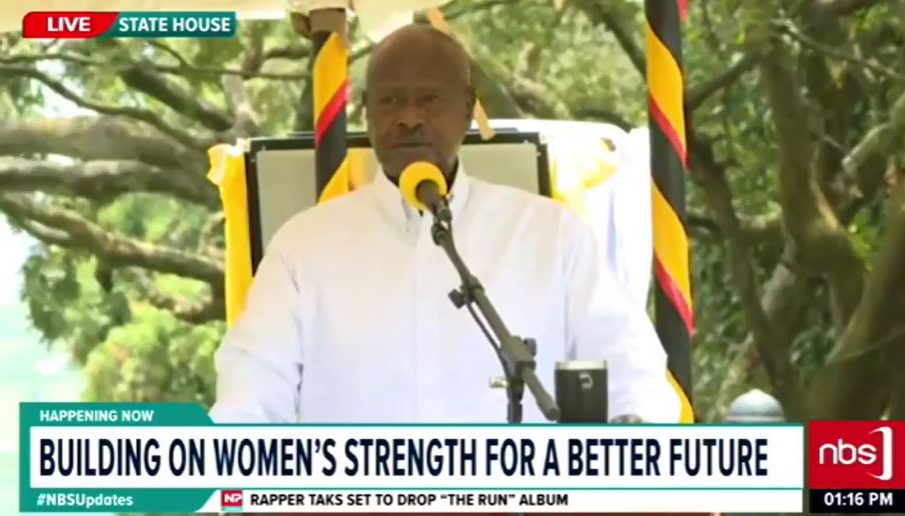 Highlights of the president’s speech,

Not a single day has Janet carried a baby on her back. The babies were pushed. She is not a horse to have children riding on her back.

This woman here (Janet) has never carried water on her head except when she was young and I wasn’t responsible.

Janet has never fetched and carried firewood even when we were in exile in Tanzania. These days she doesn’t even sweep, she supervises people to do it.

When the fire goes out, the poor woman must use her breath, she becomes the fan.

My main message is a social-economic transformation. Some of the diseases these people suffer from are a result of going to the bush to collect firewood.

When we introduced boreholes, people stopped suffering from Bilharzia. Still, boreholes are not a good idea, people should have water in their homes.

Cooking should be done with biogas from cow dung. The difference between Europe and you people is exactly that, social-economic change, not just legal.

We are poor in death, unlike other countries. This shows that if we make our own judgement, we can overcome.

I have not studied how the pandemic developed but it seems to be going down. We have been using some medicine. Patients are now very few. This Coronavirus can damage, you can die out of the damage.

I am going to make some money from Daily Monitor. They lied that I had been vaccinated together with my wife. I am going to make them bankrupt unless they apologize and lie down. Ssabalwanyi doesn’t act like that.

How would the women come up if we had not okubegera (put aside positions on affirmative action for them)? If you really want women to have a voice, you can’t go by one person one vote, you will have inbuilt marginalization. That is why the NRM thought of affirmative action.”