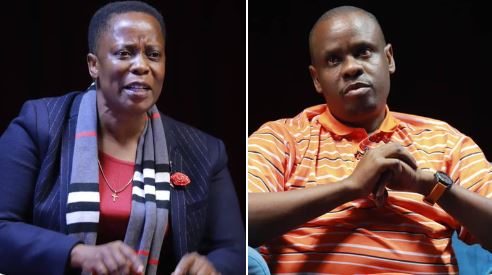 Events promoter Balaam Barugahara made an appearance on #NBSBarometer political show, which runs every Tuesday from 10:00 pm to midnight.

Mukono Municipality MP, Betty Nambooze was not thrilled with having to debate with Balaam, and she was not hesitant to let the viewers, Balaam, and panelists know.

She said when she reached the entrance and saw Balaam, she thought she had made a mistake and had come on Saturday for #NBSUNCUTSabula, an entertainment show on NBS TV and Sanyuka TV that airs every Saturday.

Nambooze said Balaam is a “useful idiot” who should never engage in useful and meaningful debates because his role is always to dilute the discussion.

According to the Next Media Services PR Desire Derekford Mugumisa via twitter, he says NBS TV deemed Balaam fit to come and discuss ‘political brokers’ because he is a political broker.